In Christopher Hodder-Williams’ science fiction novel, THE SILENT VOICE, four astronauts return from a lengthy Mars mission to find their world is not as they remember it.

Except for these four men, every human they encounter is under the delusion that nuclear war has 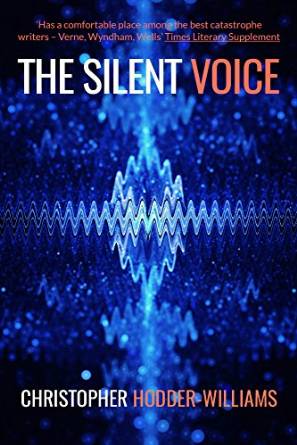 decimated the planet, killing and displacing millions and laying waste to cities, land, and the infrastructure of civilization.  Their own senses tell the astronauts that nothing has been destroyed, there are no casualties, and — most disturbing of all — no one is in charge.

In this constantly surprising, and always intriguing, novel, the handful of “normal” humans remaining must overcome their differences and weaknesses to determine the cause of the mass deception and somehow restore the world as they knew it. Their mission will keep readers guessing through instances of humor, fear, romance, suspicion, adventure, and courage against all odds.

This story was first published in 1977, so readers who bear that in mind will be impressed with the author’s prescience. The early date also explains the story’s reference to cassette tape recordings and pay phones, inasmuch as digital recording and cellular phones were decades in the future.

The story is told through the recorded diary entries of the mission psychologist, lending depth of personality and greater intimacy between narrator and reader.

Fans of “2001: A Space Odyssey” and “The Terminator” will feel right at home with this story. The author writes convincingly of NASA procedures, which deepens the reader’s “it-could-happen” sentiments.

This book does not contain offensive or prurient material and is suitable for readers of any age.

A complimentary download was furnished to the reviewer via NetGalley.com in exchange for an objective review.