Author Nadine C. Keels’ Prismatic Prospects website has announced FINDING MIRANDA as the recipient of two of the site’s coveted annual awards.  Ms. Keels says this about the 2018 awards:

“As my blog is all about hope and inspiration, these are the books that most fit that bill for me in 2018 and that I highly recommend to fellow readers.”   –Nadine C. Keels, Prismatic Prospects

The first award goes not only to the book’s author, but also to artist and designer Fiona Jayde, of FionaJaydeMedia.com, because FINDING MIRANDA has been named a 2018 Favorite Cover! 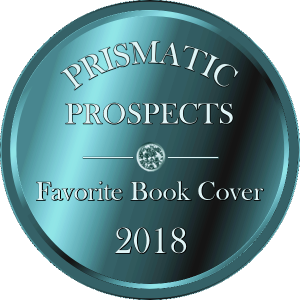 Here is what Nadine Keels had to say about the cover of FINDING MIRANDA:   She’s a shy librarian. He’s her hunky neighbor. And somebody wants them both dead. If there’s a way to properly represent a romantic comedic mysterious thingamabob of a book, this book cover is it. You can’t help but wonder what’s got bespectacled Miranda hiding in the bushes with her eyes (well, her eye, at least) popped wide and her mouth hanging open. The minimal but vibrant colors work well together, with the see-through title using a leaf to dot an i. How fun!

I feel especially honored because, out of all the books Ms. Keels read in 2018 (and she reads a lot), Prismatic Prospects  lists only fifteen covers as her 2018 favorites.  Nadine says this about her list of favorite covers:  “I’m not strictly a “judge a book by its cover” kind of reader. Still, I have an appreciation for cover art as a part of the reading experience. Here are covers I particularly liked from books I’ve read this year—and it’s quite a list this time around, folks!”

The second award, which — if possible — means even more to me than the first, is a 2018 Favorite Reads award.  About naming FINDING MIRANDA as a Favorite Read, Nadine had this to say:

She’s a shy librarian. He’s her hunky neighbor. And somebody wants them both dead. I can’t say I know the best way to categorize this romantic comedic mysterious heart-tugging thingamabob of a book. But I enjoyed the heck out of it! Miranda is one unique cookie, and the romance is too cute. The mystery includes enough danger to keep you suspicious, and it escalates to the gripping level of a thriller. Plus, the humor is quirky, but the tale isn’t silly. Fellow readers who can rightly appreciate a thingamabob would do well to pick this one up.”

Only fourteen books received the 2018 Favorite Reads award! I am especially happy and privileged to be remembered in December 2018 by Ms. Keels, because she read and reviewed FINDING MIRANDA way back in January — eleven months earlier!

If you’re inclined to read Nadine’s review in its entirety, the text is reproduced below.  Or you can visit the Prismatic Prospects site for yourself. You’ll be glad you did.

Miranda is a shy librarian who’s new in town and chronically invisible. So it’s ironic when her handsome neighbor, Shepard, sees her–even though he, well, doesn’t. And not to mention that now there are some men around who see both Miranda and Shepard and apparently want them dead in Finding Miranda, a novel by author Iris Chacon.

I wasn’t sure what this book was, exactly, when I picked it up. A cozy mystery? A romance? Chick lit, maybe? Well, no, not chick lit. But now that I’ve read it, I can’t say as I truly know what to call this romantic comedic mysterious heart-tugging thingamabob of a book. But I enjoyed the heck out of it!

I thought the read would be more Miranda-central than it is, but it includes other characters’ perspectives, and that’s okay. Miranda is one unique cookie, the romance is too cute, and though I (lover of love that I am) very, very rarely ever read of a hero I’d call swoon-worthy, I might call Shepard that. Not because of his long hair or muscly build (honestly, the more it seems a story is trying to make me swoon over a romantic hero’s looks, the more it annoys me.) But Shepard shines as a layered, likable, flawed, and interesting person, not just the dashing or lovey-dovey figure the heroine falls for because that’s what’s “supposed” to happen in romances.

And the mystery. It’s not a whodunit or sleuthing type of thing, but it includes some politics, corruption, enough danger to keep you suspicious, and it actually escalates to the gripping level of a thriller.

Yet, the story remains its own, remarkable something, where the humor is quirky but the tale isn’t silly. The characters aren’t just caricatures that stuff happens to, and the story doesn’t pull punches and let everyone off easy. It came to a point or two when I had to set the book aside and give my affected heart a break for a minute.

Oh, and for the dog lovers, did I mention the cast of characters includes an awesome dog?

Here’s a winning tale with a bespectacled woman in the bushes and a great message on where courage comes from. I’d highly recommend this book to fellow readers who can rightly appreciate a thingamabob.

Note to my blog readers: this novel contains just a smidgen of crude humor and minimal profanity.

Everyone likes to receive shiny new gifts at Christmas, and authors are no exception.  Many cheerful thanks to Nadine Keels and the Prismatic Prospects website for giving FINDING MIRANDA and Iris Chacon the marvelous gift of two shiny new awards.

FINDING MIRANDA, the award-winning audiobook version, is now available in:

Receive announcements, giveaways, and insider news — as well as your free e-book download of Schifflebein’s Folly — when you join the Iris Chacon IN CROWD by clicking HERE.