PAST TENSE, by Lee Child, has been rated five stars by author Iris Chacon.

I received a prepublication copy of this book from the publisher with no obligation to post a review. The opinions expressed are my own.–Iris C.

It’s November as I write this, and many people are thinking about Thanksgiving and Black Friday bargains.  Lee Child fans, however, have been anticipating this particular November because Past Tense, the new Jack Reacher novel, hit the shelves this month.

Why the anticipation, you ask?  Ah, you are not yet a Reacher aficionado. Fear not, I will introduce you. First, banish all thoughts of Tom Cruise, notwithstanding his formidable physique and tough, Reacher-esque attitude.  I like Tom, but the real, (i.e., the literary) Jack Reacher is bigger, tougher, sometimes meaner, and much less pretty. These are only a few of the attributes author Lee Child uses to place his readers squarely in Reacher’s thrall.

This latest in Child’s series has the peripatetic “Reacher” (not “Jack,” and certainly never “Jackie”) making a stop in small-town America in search of his past — hence the title, Past Tense — with the second word developing more than one meaning when Reached steps up to right wrongs, defend underdogs, and exact a little payback as only he can.

This is the 23rd Jack Reacher book, but you can read Past Tense first and the others later. The novel stands on its own quite nicely, and you will enjoy inferring Reacher ‘s  character traits from his actions.

Action is key in Reacher novels, but don’t be surprised if you find passages of artful prose that force you to stop a moment and just enjoy the beauty of Child’s language. Those interludes serve to remind us readers that a popular action story need not be a comic book linguistically.

Get Past Tense from Amazon or your favorite book seller.  Check out the reviews on Goodreads.

COMING IN TIME FOR CHRISTMAS — a great audiobook to delight the ears and warm the hearts of the whole family.  (And it’s Free with Audible.com’s trial membership.) 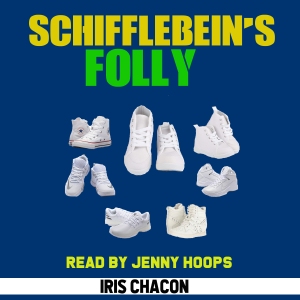 (Pssst!  Sign up for Iris Chacon’s IN-CROWD news and receive the e-book version of this award-winning family comedy as a gift.)

One thought on “Book Review: PAST TENSE”

Four days left to get 20 free mystery-thrillers from great Prolific Works authors.
Only one week left in the Prolific Works 20-Mystery-Thrillers Giveaway