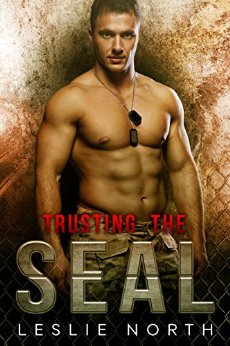 Review of Trusting the SEAL, Saving the SEALS Book Three, by Leslie North.

When Toni hires the hunky former SEAL, Spencer, she doesn’t that all other applicants for the job have met with Spencer’s fist and are lying unconscious in the alley behind her building. Only Spencer showed up for the interview; made sure of it. He and his buddies need Spencer inside Toni Williams’ organization because they believe her estranged father murdered a beloved member of their SEAL Team.

Spencer has a “cold-as-ice” reputation, but he warms up quickly when he begins living in close proximity to Toni. As their relationship develops, secrets are revealed on both sides, and the SEAL Team’s quest for a murderer takes some unexpected turns.

Leslie North’s novel is long on romance and fairly short on militaristic action, but the story moves right along, and the characters are interesting enough that the reader may be inclined to go back for Books One and Two of the series. The plot is sometimes predictable, and the prose is seldom deep or poetic, but North is a journeyman novelist whose product is entertaining for fans of the genre. Expect some salty language and some sexy interludes not for kids.

An advance reading copy was provided in exchange for an objective review.