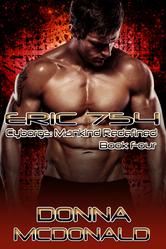 Review of ERIC 754 by Donna McDonald

Rated 4 out of 5 stars. Entertaining; I can’t wait to read more in this series.

Readers who are hardcore sci-fi fans should be aware that this novel is less Isaac Asimov or Ray Bradbury and more Jane Ann Krentz or Sandra Brown. This is a romance in futuristic clothing; fun to read and intriguing enough to cause reader interest in the other books in this series, but definitely lacking in the science aspect of science fiction.

This series of novels follows the love lives of several cyborg soldiers (think the ultimate six million dollar man) as they try to come to terms with not only their uncertain future as war turns to peace, but also their relationships with human (and semi-human) females as they discern how much of their own humanity remains intact.

Eric 754 has survived many reconstructions and upgrades, so he knows what is in store for cyborg Lucy when her violent military programming and illicit Companion programming are about to be restructured, turning Lucy into something or someone not yet determined. No one can predict how Lucy will function or how much of her own consciousness will survive the extreme changes to her mechanical identity, but Eric is determined to stick by Lucy no matter what. He is committed to loving her, whether or not he can ever again convince her to feel the same way about him.

The love story is loaded with conflicts and adventures, cyber warfare and espionage, daring escapes and brave battles, so it is never dull. The narrative style is sometimes unsophisticated, even slightly immature, but the story moves along, keeping the reader interested and caring about the characters. Even with its occasional narrative weakness, the book entertained me enough that I immediately ordered another book from the series and look forward to reading it soon.

Caveat: Not for kids. These are soldiers, remember, and this is a romance novel for adult readers, with adult themes. Expect some profane language and some sexually charged dialogue. Lovemaking is dealt with tastefully, but couples are not always married or monogamous.